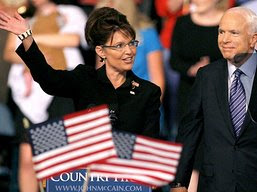 While Sarah Palin's acheivements as a woman, a mother and a Governor must be lauded, it is obvious that she is in no way ready to be a heartbeat away from the presidency.

Some might argue that her experience is comparable to Barack Obama and while I disagree with this even if it was true, BHO has had almost two years to get himself up to scratch on issues of the economy, national security and foreign policy; Palin has three months.

Sarah Palin's views in many ways mirror Obama's bipartisan, change the status-quo mantra. Such that the decision to put her on the ticket can be viewed as a tacit endorsement of the Democrats' Presidential nominee's ideology. She was clearly picked to serve as an alternative to Barack Obama, for those die-hard "Hilly-Billies" and ardent feminists who just want to see a woman on the ticket.

McCain picked a running mate that would give him the best chance of winning the election rather than a running mate that would be the next best commander-in-chief of the most powerful nation in the world should -God forbid- the worst happen. At 72, McCain has already used up his "fourscore and ten years" therefore to carry out such a gamble on the nation's economy, security and foreign standing makes me greatly question his judgement.

Sarah Palin appears to be a good woman and in the future she could develop into great leader of America but she does not have enough time to get prepared to fill in the big shoes that she has been offered what with a campaign trail and a newborn!

She can be likened to a half-baked bread taken from the oven to be put into the microwave! I only hope she doesn't burn irredeemably...
Posted by MissITKnows at 17:36

Hmmm....i don't really like her that much. But then again i have not been following the republicans. ;-) your writing is soo hard to follow sometimes because it is really well-written and intelligent but i love it !

I think, with the nothing that i know, that it was a bad choice for mccain and he is just making a fool of himself ! also i think that obamam will win if america is ready !