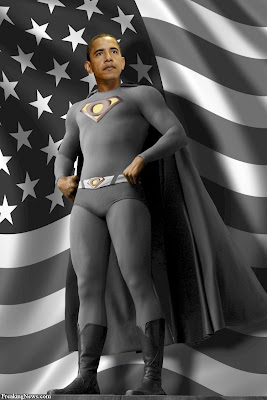 Obama has to win.

Aside from his superior judgement -as demonstrated by his premium policies and his choice of Michelle-, his inspiring persona, and his distinguished appearance (to say the least), Barack Hussein Obama has to be president because if he isn't elected, the world is in SERIOUS risk.

I do not say this lightly.

The fear that grips me at the thought of the possibility of "President Palin" is far more intense than my fear of my mother!

If John McCain is elected, there is a significant chance that he might not survive his first term. I mean God forbid his cancer returns or worse still -but in my expert opinion not less likely-, a moose hunting accident occurs in the forests of Alaska.

These are harsh realities but realities nonetheless.

I do not have the power to vote but for those of you who do;

Consider yourself Batman/Catwoman with a mission to save the world from an invading, lip-stick-wearing, pit-bull.

Obama/Biden '08 in the mighty, unblemished, all-powerful, name of Jesus!

The ripple effects of this man's victory all over the world are not easily comprehensible. Is it the unspeakable joy of the fulfilment of a decades-long dream, or the new ray of hope for minorities everywhere?

Amidst all the hype, we should soberly hope that he doesn't let the world down. That's not an impossibility, especially when you critically examine all that Mr. Bush is handing over to him with the presidency.

Let it not be said that it was a mistake to put an African American in the white house.