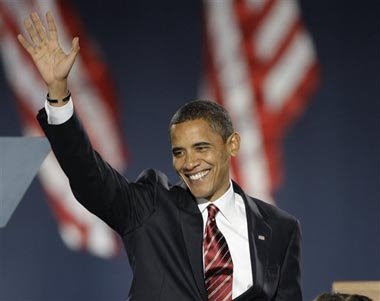 On that day black people in America did not yet have the vote.

On August 29, 2008 almost 48 years to the day, Barack Obama was nominated as the presidential candidate for the Democratic Party.

For a year, my mother has devoted her life in prayer and fasting for the miracle we witnessed at 4.00am on the 5th of November, 2008.

Her generation and the generations that came before her know much better than I will ever know about the significance of this day.

Slavery, Segregation, Apartheid; they potently felt the repercussions of being judged by the colour of one's skin.

All I can bear witness to is the feeling of my success being perceived as an exception to the rule for my race.

However, today all that is over.

The inherent good in humanity has triumphed over the beast of prejudice.

Justice and liberty is truly within the grasp of all.

I am not proud just because I am black. It is much more than that, I am proud because in this moment my faith in humanity has been restored. We, as people, might not be perfect but this moment has shown that there is enough good in us to keep me optimistic for the future.

It is for this reason that I am daring to defy the cynics.

"With the help of God, Michelle and the citizens of America, Barack Obama like his fore-runner Abraham Lincoln will be one of America's greatest presidents."

yes he can! Obama is a change that we can believe him. i feel so honoured to be born at such a time as this. obama has given me an 'audacity to hope'

I haven't been feeling the same giddy joy that everyone's been feeling since Obama won- my joy is more calm, more thoughtful. I don't agree with all his policies but I'm hoping he does a great job in his time at the White House.

It's important to note that there is a tendency for people to view him as a collective entity, and we should all remind ourselves that if Barack fails- or doesn't meet up to the expectations of the world, he will do so on behalf of himself and his administration.

Most people are getting carried away, grouping him as their 'brother'. I get that, but I dont think he represents all African Americans or God forbid all black people or all minorities.


Did George Bush or Bill Clinton represent all White Americans?

I hope you get my point - his successes and or failures will be primarily HIS- at best his, his administration's, his party's and his family's.

Then anyone who feels the need to attach to his personality can hop on the train and feel proud or ashamed of him. It's not bad to do so anyway, we should all just do it with understanding.

However, in terms of the significance of his victory, as you said too Itunu, my faith is restored. In the existence of true democracy- Nigerian politicians and citizens can learn a lot from what has played out in the US over the past few months.